MVI_9738.m4v
These are the sound recordings for the interview of me reading the lines of the script.

“I can see that you’re facing directly towards the camera.”-Maddy

“I noticed how you analyzed how the characters interacted with each other, and their relationship.” -Isobel

“Chloe pronounces her words really well so the audience can understand her.” -Sydney

I learned how to be a sound designer and an actress. I also learned how scripts and interviews are made. I now know to look more closely at what makes a scene good. There are many elements to a film. The cinematography, sound effects, the interaction between two characters in a story and the acting are what the audience should analyze.

If you’re looking for someone who will take charge and be dependable you’re looking for Sydney! Her and I have known each other only since the beginning of the year, but ever since I’ve met her she’s always known what to do and has stayed on task. Sydney is not afraid to prove her points and ask questions when she is unsure. She always has had an amazing touch of style and she loves to express herself with the things she wears. Sydney is very hardworking and I strongly recommend her to any group looking for guidance.

We used three lights, two of them pointing directly to my face and one of them behind me to achieve a soft look.

The camera stayed directly in front of me with no movement. The camera was positioned to be at eye level.

The only shot in the film was a front face close up.

Write a brief description about the project

We’re analyzing the video on the cinematography, editing, sound effects, and story. We’re watching the 4th clip from the Citizen Kane movie. Later, we will use this movie as a reference to make a film of our own.

For this stage, I placed the video clips into Premiere Pro and started editing. I cut out unwanted parts of the clips. I combined the clips and made each shot flow smoothly to the next. I made sure the audio of each clip was loud and clear so the audience would be able to understand what the actors were saying. I added in the ADR.  I experimented with the colors section of Premiere Pro. I liked changing the color and look of the film. I uploaded the finished product on Youtube.

Working with the Editor

I decided to record additional sound effects since there was not enough. I decided to not include video transitions between clips because I didn’t want to add too much to the film. I also didn’t want the film to have choppy editing.

How Could I Have Improved the Film

I learned how to edit a film. One problem I had was how to make the sound louder. I figured it out by adjusting the number of decibels. I learned how to be a sound designer, how to write a storyboard, and how to come up with fun interesting ideas with your group.

During the production stage, I reviewed the storyboard with the director. I helped the actors know where to be so I could have a good place to stand and get the sound I want. I recorded what the actors said during each shot. I also recorded the sounds in the film, such as the sound of the chocolate hitting the actor’s face. Later I did ADR. 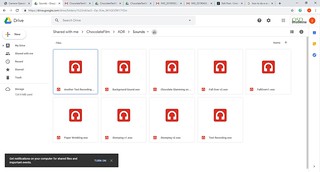 This is where I labeled and stored all my sound effects.

What I Learned and Problems I Solved

For the pre-production stage, I discussed ideas with the director on how to make this film. My role is the sound designer. I also helped write the storyboard with them also. With a sound recorder, boom mic, and a pair of headphones I was able to test out if the sound quality was good.

Here’s a folder of the two test recordings.

This is the storyboard that I and the director made. We discussed our ideas on how to film it and wrote them down. We decided to include close-ups in a couple of shots so we could dramatize how the character was feeling. The first shot is her turning her back away from the camera. This makes her mysterious, and she is also closer to the camera so she can appear larger than her husband. The side angles show that the character is distant from his wife, and doesn’t want to look at her.

What I learned and Problems I Solved

The Battle Over Citizen Kane